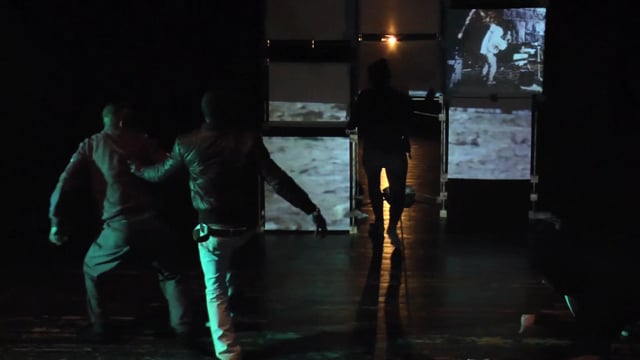 Place of the workshop: Jailhouse of Milan-Bollate

Audiences and territories involved:
Seven students from different disciplines (communication, advertising, theatre and social education..) mainly from IULM University of Milan – partner of the workshop – and seven inmates from Bollate Prison.
For half of the workshop, the theatrical stable group of Bollate consisting of six external from the territory here around (Vanzago, Bollate, Rho) and four inmates reached the sessions.
A total of 24 participants.

Methodology proposed: Experimentation and research of a common language between the actor (physical space) and archive footage through visual art, new technologies and theatre.

Results of the workshop: 3 short movies of the 3 performances represented on stage by the groups and created throughout the process described

Summary of the methodology proposed:
The main objective has been to find a common language between the actor (physical space) and archive footage through visual art, new technologies and theatre. The idea around which the group has to think is: What sustains the body? What are the things that support the body?
The methodology is based on two triangles, two groups of 3 main actors around which revolve continuously the workshop

1. The actors on stage /the device, the group, the archive
– device /made by wooden cubes and laths that framed the screens, the structure is modular and extremely adaptive to every situation, concept or idea – the bodies and the videos have to relate firstly with the building of device’s space and then with its limits and opportunities.
Each screen can project both archive images and live frames shot with a camera on stage, independently one from the other thanks to a TransFORMAS software.
– group /after the first contact among participants and the inceptive knowledge of the device, the group has been divided into 3 teams – 2 of 5 participants and 1 of 4 – assigning to specific persons in the team one of the tasks required: selection of images, visual art, light design and sound design.
– audience /which gives meaning to everything and has the complete vision of the performance.

2. the technological actors / video, lighting, sound
– video / The participants work on 10 minutes of the archive previously selected plus the opportunity to use the live camera to shoot videos directly on stage.
– lighting / the participants can choose many different lights, colours and scenarios
– sound / the sound is an important component because the teams have to choose if leaving the original sound of the video, manipulating it (slower, faster, …) or suggesting a new sound design – maybe live recorded using a microphone.

Each of the group produced a short movie of its performance represented on stage by the group, and created throughout the process described.